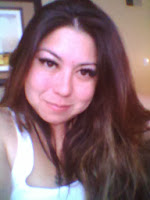 About the Author:
Glory Rabenaugh is a mother of two wonderful children, a soccer coach, an entrepreneur, and a business woman. She can easily read two hundred books in a matter of months, whip up traditional Japanese stir fry while listening to "Holy Grail" by Justin Timberlake/Jay Z, run around with the youngsters for two hours at soccer practice, and still manage to take an hour out for herself each week to get her lashes done. Glory was born, raised, and currently resides in St. Louis, Missouri. She has a bachelors degree in Business Administration and works in the healthcare industry.

Fangtastic: Tell us about yourself and your writing.
Glory: I'm an extremely shy and private person. I keep to myself, I don't do public engagements, I hate walking into a crowded restaurant by myself, I'm pretty sure I have a social anxiety disorder but I'm okay with that because that's me! I'm divorced with two amazing children. I was born, raised, and still reside in the suburbs of St. Louis. I'm half Japanese and half German and I'm passionate about passing on both cultures to my children. I love writing because it lets me live. It allows me to be someone that I'm not, experience things that I would never do, feel like the heroine that I'll never be. It is an escape and I love unique, original story lines that make you winder if they could actually be true.

Fangtastic: Do you write in multiple genres or just one? If just one, do you ever consider straying outside your genre?
Glory: My one true love is the paranormal romance genre. I do write some things in the New Adult category, but I'm always so tempted to throw in a dashing European vampire or ruggedly handsome werewolf!

Fangtastic: Are you a plotter or do you write from the seat of your pants?
Glory: I have a general theme/plot in mind but once I start writing sometimes that goes out the window. I' definitely a fly by the seat of my pants type of person in many aspects of my life!

Fangtastic: If you could keep a mythical/paranormal creature as a pet, what would you have?
Glory: A griffin for sure! My pet would have the eyes and ears of a hawk to see future attacks and hear plotting whispers, a vicious beak to blind those that attack me, and enormous wings that could take me anywhere I wished. I would run my hands across his lion body, reveling in the softness of his fur, the strength of the tone of his muscles. He would protect me like no man could and be loyal to his death. When I need comforting, my griffin would wrap his tail around me and shield me into his body like a mother would a babe.

Fangtastic: Tell us a little about your latest release?
Glory: "Revelations Coming" has been a favorite of mine to write and I hope my readers enjoy it as much as I have. Venus is a girl that you can root for. She's had such a tragic upbringing and you really push for her to find happiness. You will watch in amazement as she transforms from a broken, unloved teenager into a powerful, independent woman with a mind and needs of her own. She has been charged with the heavy task of choosing a mate amongst the princes of the two most powerful Vampyre bloodlines. The men of my series are all drool worthy. What is a paranormal romance without multiple love interests and Venus has them in spades! Michael is an Archangel of the highest order, send down to Earth to guide Venus on her path of choosing the correct mate. But the lust he feels for Venus sometimes clouds his heavenly judgment. Riken is the leader of the Rex Deus, the infamous bloodline of Jesus, struggling to maintain control over both his throne and Venus. Arias is the leader of the Descendants of Cain, evil that has birthed evil, who is determined to battle his demons to be a better man for his future Queen. Venus has both good and evil running through her veins, which bloodline will she choose in the end?

Fangtastic: What are some of your other hobbies outside of writing?
Glory: I coach my daughter's select soccer team which takes up a TON of my time. We are literally at practice every night of the week and you might as well cross the weekend off my list of free time too! No wonder I don't have time for a boyfriend! I also enjoy drawing fantasy art by hand. I have to be in the mood but when it strikes me, it's an actual surge of creativity that is screaming to get out. Sometimes I surprise myself with a finished piece of art and I'll store it and a year later find it again and barely remember drawing it.

Fangtastic: What is a talent you wish you had, but don't?
Glory: Dancing. I'm horrible at dancing! So, obviously I never want to do to a club for dates or with friends. I remember one of my girl friends dragged me to this Jamaican club where she's a regular. And she went up and told the DJs it was my first time there and they made me get in front of everyone and dance. It was horrifying and I'm sure the funniest thing ever to watch. What's even worse is when your man wants a striptease or you want to surprise him by dancing sexy and you start dancing for a few seconds and then realize he's looking at you crazy like, "What is she trying to do". Yeah...that's pretty embarrassing too!

Fangtastic: Favorite color?
Glory: Black. It is soft like the wings of a raven, cold like the pavement on a rainy Winter night, sharp like the edges of obsidian glass, as smooth as the satin sheets I sleep on at night, mysterious, haunting, incredibly sexy yet sophisticated. Black is my inner aura that pulses to the beat of my heart.

Fangtastic: If you could travel anywhere and do anything, no limits or money holding you back, where would you go?
Glory: Beauty inspires me. I would wade in the crystal clear waters of Fiji while my native hunk of a man waits to rub suntan oil on me in my open air hut by the water. I would sit lakeside in Glacier National Park with canvas and oils and paint the wonders of God. I would search for the ghosts of the kings of the past among the underground tunnels of the Egyptian pyramids. I would dance naked in the moonlight around Stonehenge. I would navigate the emerald waters off the coast of Thailand. I would parachute down over Dubai so that I can see the architectural genius of man. I would kneel down and pray in the Sistine Chapel while still being able to see its beauty behind closed lids. And I would be serenaded by a delightfully handsome stranger under the shining lights of the Eiffel Tower as snowflakes grace my cheek.

Fangtastic: Thank you so much for letting us pick your brain Glory. Readers please support an amazing Midwest talent and check out her trailer and book information below. Enjoy! 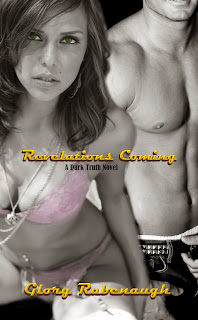 Blurb:
A teen who has seen and experienced too much for her years, Venus is thrown into the dark and seedy underworld of the Vampyre Nation. Shocking revelations about the truth of Christianity, coupled with her coming of age romances aid Venus to discover more about her past and ultimately reveal what is to become of her future. Revelations Coming, the first installation in A Dark Truth Novel Series, will terrify you with the sadistic nature of both Vampyres and Angels and entice you with the not-so-innocent and increasingly passionate sexual encounters Venus endures.

Excerpt:
"Arias is here my lord," Corbin spit out breathlessly.
"Come Venus," Riken said already starting for the door.
She didn't hesitate and all but plastered herself against him. Venus knew to be frightened from Riken's earlier description of the Dark Price. He was enormous, dangerous, cruel. The embodiment of Satan himself. He led a bloodline full of sadistic, bloodthirsty vampyres and this was the one searching for her. She didn't want to meet this creature. They rushed out of the office, down a back staircase and towards a back entrance. Venus slammed into Riken when he stopped abruptly. She peered around him to see what was going on and Venus swallowed hard as a warrior filled her vision...one that could only be Arias Hassan.

She gasped, robbed of any breath. Lord, he was beautiful. Tattoos covered his massive arms and bare chest, his head was shaved bald. He was the color of chocolate sand and he emanated power and a call so strong and deep within her, her knees weakened immediately. He had nearly black eyes that started to swirl and twist like a turbulent ocean as soon as he saw her. His guards almost equally massive fanned out around him. It was clear that Riken and his crew were no match for these warriors.

"Come to me," Arias growled to her.
Venus' eyes widened as her body listened without hesitation. His command was like a direct line of energy to her chest, pulling her towards him. Riken pulled her against him creating havoc within her. Both of their blood was calling to her but Arias' was stronger. He was older than Riken, by nearly three hundred years. Venus unconsciously struggled against Riken's hold.
"No Venus, don't leave me," Riken pleaded.
"Come to me little one," Arias purred again.
Venus started forward again when she heard the click of a safety being thrown off. She turned her head to the side and watched horrified as Corbin palmed an enormous gun in his hand and fired at Arias.
"No!" she screamed, her power billowing out of her.

Her entire focus was on the path of that bullet. If she failed that bullet would find its way into the Prince's temple and while it wouldn't kill him, it would incapacitate him enough for Riken and his men to destroy him by severing his head. She refused to let that happen, no matter how bad that man was in front of her. The bullet dropped to the floor feet from Arias. Venus was breathing hard from the mental exertion that she hadn't used in over ten years, disbelief and relief flooding her body. Arias' jaw dropped slightly and his lips parted. He raised his hand to beckon her to him again. But Venus realized too late that it wasn't to beckon her to him, it was to stop her. Guns exploded around her from both sides. Venus trapped in the middle. She heard Arias' roar and she Riken's roar. Stop! She screamed in her head, thrusting her arms out. Her mental power that she had hidden and been ashamed of for so long, flooded out of her body, billowing her hair about her head.

You can find Glory online at:

Available for Purchase At:

a Rafflecopter giveaway
Posted by Unknown at 12:00 AM